hi friends! happy end of august. i don’t know about you, but i am READY for summer to be over. i’m craving crisp fall days, the opportunity to leave my windows open and not invite crickets in to hang, earlier sunsets (i know, i know) and apple picking. fall has been my favorite since i was a little kid (followed closely by winter!), and i can’t wait for it to arrive. that said, i’m hoping to squeeze in a few more gloriously long days of biking, along with one more beach day before the breeze blows in.

anywhooo…with this post, i’m starting what i hope will become a monthly series where i clue you in on my life lately–whether it’s books i’ve been loving, shows i’ve been watching, trips i’ve been taking…you get the gist. i know many of my instagram followers don’t even make it to this corner of the web, but for those that do, this will serve as an easy, low-commitment way for you to get an update on what’s shakin’ (and give me a bit more room to breathe, character-count wise).

so, august! this month, i traveled to san francisco to see my BFF kim (with a bonus guest appearance from my moms, who were there for a medical conference), spent 24 hours in houston for work, and tried to soak up the dog days of summer in the city. here’s a bit about what’s been on my radar over the past few weeks. 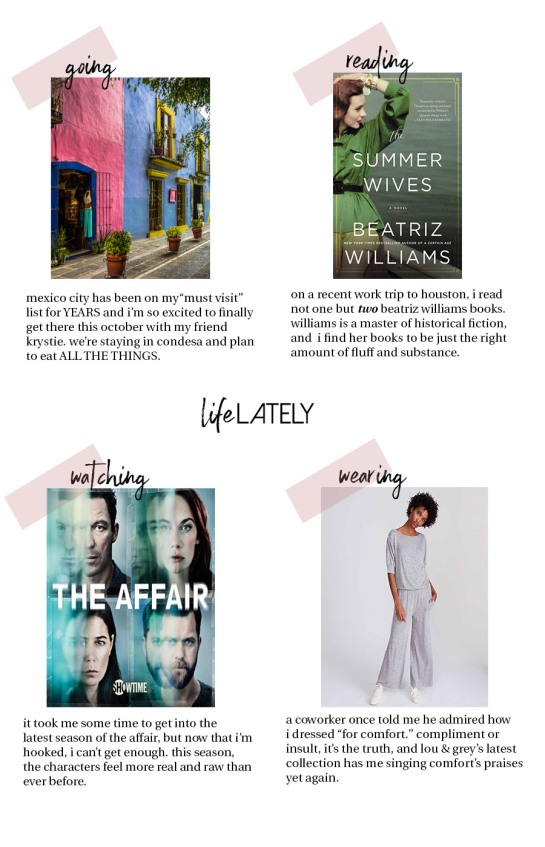 going. my friend krystie and i are putting the finishing touches on our upcoming (october) trip to mexico city. neither of us have been, but we’ve both heard such a amazing things about the food and design scene there, and we cannot wait! we’re only there thurs night-monday night, so it’s a quick trip–but as big foodies, we’re planning to squeeze in a whoooollle lot of eating and (a little) drinking whilst there. we’re staying at hotel carlota, a boutique hotel with a small pool (necessary!), in house restaurant, and cute, modern rooms. ps: image above found here.

reading. this week, i spent 24 hours traveling for work, which meant two 4-hour flights along with a few extra hours delayed in the airport. as a result, i read not one but two books by beatriz williams, a historical fiction author i love. williams’ books are wonderfully well-written, and always feature spunky, smart, industrious female characters. summer wives, which was my pick from the two i read this week, featured all the hallmarks of a williams’ book: smart social commentary, details that magically take you back in time, a swoonworthy love story, and (gasp!) murder. literally, what’s not to like?

watching. omg, you guys. are you watching this season of the affair? the first two episodes started out a bit slow, and i almost gave up on the show (which i’ve been watching from the beginning), but good lord, i’m glad i didn’t, because SHIT.GOT.CRAY. the most recent episode i watched was a doozy, and threw me for a loop i was 10000% not expecting. apparently, they’re doing one more season after this one, and while i’m not exactly sure where they can take the show after this season’s plot twist, i’ll be eagerly awaiting its premiere.

wearing. you all have heard me wax poetic about lou & grey many times before. the brand, which is an offshoot of LOFT (random, right?), has become one of my favorites over the past year or so. i LIVE in comfortable clothing, which just so happens to be l&g’s thing, and their new arrivals for fall are nothing short of fantastic. i tried the jumpsuit above on last weekend, and had to use literally all my self control not to bring it home to me (note to self: it’s still 95 degrees outside). jumpsuit, as soon as the temps dip below 70, you’re comin’ home with me.

if you’ve made it this far, be a dear and tell me: are you here for these monthly roundups?