there are many things i think i did wrong in this renovation. but hey, it was my first time on the job, and let’s be real: there was a slight case of amateur hour going on in these parts. i did my best, certainly, but there are many small things that i’d change if i could go back and do them again.

one of those small things, as it turns out, i can still change! and that’s my kitchen lighting. see, before i embarked on this renovation, my mindset was more, “ooh, pretty lights!” and less, “i need an actual lighting plan.” in fact, i didn’t even know a lighting plan was a thing. no one tells you these things, you know? you only hear about them while you’re listening to the chris loves julia podcast and it’s too late to make a change!

{sidenote: i am obsessed with the chris loves julia podcast, and you should be too}

anywho, suffice it to say, when the contractor and electrician told me two flushmount lights would suffice for kitchen lighting (and told me i really didn’t need under cabinet lights and that they would be way more expensive), i listened. and they were wrong. turns out, i could have used a lot more lighting in my kitchen. i should have coughed up the extra dough for under cabinet lights.

i should have added more task lighting, and more specifically, i wish i’d added library sconces above my shelves, like the kitchen below (i also wouldn’t say no to that gorgeous simple gold pendant above the sink).

i DEFINITELY should have gone for three flushmounts instead of two. and most importantly, i shouldn’t have gone with exposed bulbs in the kitchen. exhibit A, folks (my kitchen):

as i pretty quickly learned, those sort of cool exposed bulb flushmounts are all well and good–when you don’t really need them to cast off a lot of light. they’re hip, yes. they look cool, yes. but functional? not exactly. i’ve tried a large variety of different bulbs in these babies (if you’re curious, they’re these from the young house love for shades of light line), and unfortunately, they simply don’t cast off enough light for a busy kitchen bee like myself. additionally, because there’s no glass shade for the light to bounce off of, they tend to be a little bit harsh when they’re on. NO BUENO.

but as my girl carrie bradshaw says, COULDA SHOULDA WOULDA. i didn’t know what i didn’t know, and so i made some mistakes. luckily, the one above–the type of flushmounts i bought–can be fixed. YIPPEE! i’ve been living in the grand apartment for almost 5 months now, so i think it’s safe to say i’m somewhat settled. and being settled for that amount of time has given me lots of moments to ponder what type of lighting i should do next. as of now, i’ve landed on doing a traditional schoolhouse style. i know, i know, so predictable. but i think they’ll work, height-wise, and for the most part, they’ll allow for a higher wattage than the ones i have now (which are limited to 75 watts). 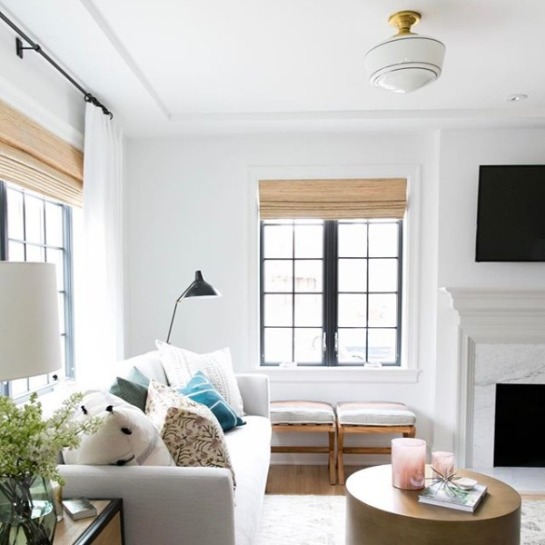 two of them, obviously – but you get the idea. as of now, i’m not leaning towards brass (the kitchen is black and chrome, finish-wise, and i think adding brass might be a bit too much).

i sort of had my heart on the above style (which you can find at schoolhouse electric), but with the black and white striped shade (i’m thinking the stripes will play nicely off the my floors), but it seems schoolhouse is no longer making that colorway. SADSIES.

which has led me to go back to the drawing board, and scope out a few other schoolhouse style options.

still too harsh, what with the clear glass?

as you can see, i’m having quite a bit of trouble deciding. thoughts from the peanut gallery?! help! 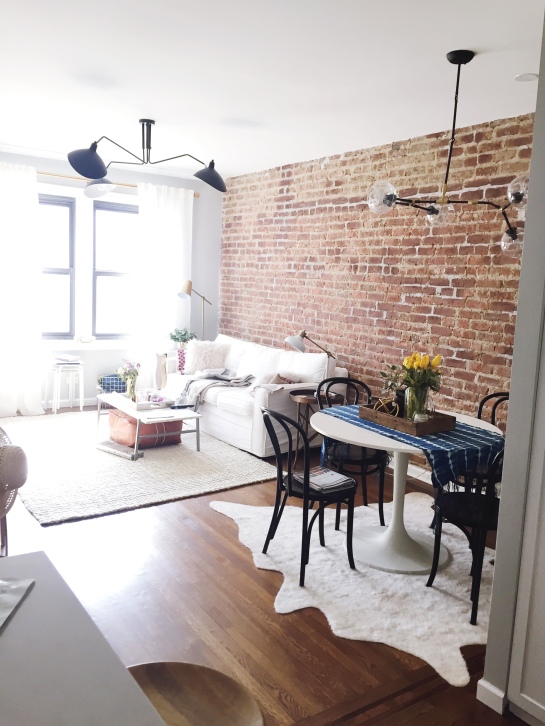 HEY. HI. HELLO THERE! HOW ARE YOU? i know, no one wants to hear the story of the amateur blogger who got too busy with her day job and dropped off the face of the earth. but it’s true truth, really.  i know it’s been a while since you heard from me, but life got away from me, and i spent a few months living life out in the world instead of on the internet.

that being said, a few VERY KIND strangers have commented that they’d like to hear more about the grand apartment, and when kind strangers ask for something, you must give it to them. so here i am, attempting to fill you in on the last few months, and promising, yet again, that i’m back for real. (yes, i’m aware that you haven’t heard a peep from me since december).

here’s some real talk: around the same time i moved into the grand apartment, i got promoted at work. i worked my ass off to get there, and i pushed hard for the promotion, and then i got it, and for a little while it was like, this is it? same shit, different title? then the new year rolled around. and we hired someone to work below me. and then we hired someone else. and guess what, you guys? MANAGING PEOPLE IS HARD! i know, i know, DUH, SARAH. but let’s just say i wasn’t exactly prepared for doing my workload and supervising someone else’s at the same time. so i spent the first few months of this year buried in the weeds, trying to keep my head above water (a new feeling for me, if i’m being totally honest. it takes a lot to bury me).

at the same time, i experienced a bit of renovation burnout. the apartment wasn’t (and isn’t), 100% done, but i was OVER IT. over with bugging contractors, over with dealing with the asshole who screwed up my countertops, over with handing off huge sums of money to people who rarely did things exactly right and/or in the timeline required of them. 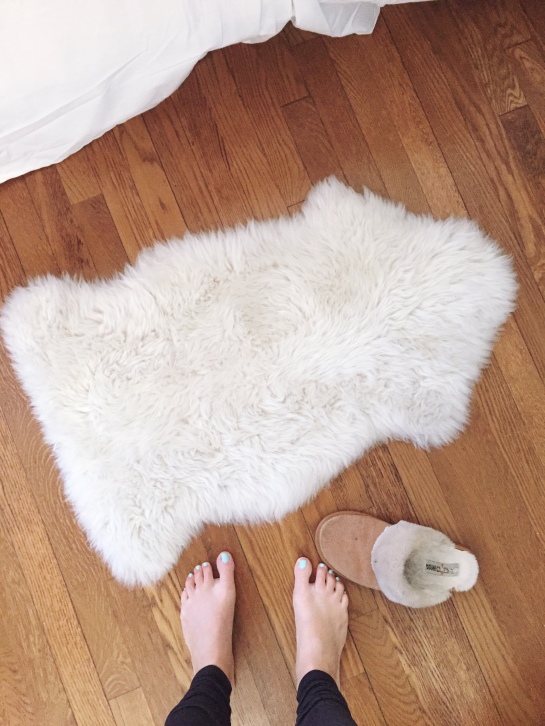 so i took a break. i took some time, and i just LIVED. i didn’t order anything new. i didn’t put up my ceiling medallions. i didn’t seal my brick wall. i didn’t schedule the reinstallation of my f’ed up countertops. i just went about my life, and it felt good.

great, even. sometimes i forget that this entire process unfolded within a single year (and that the bulk of the hard work took place within mere months). GUYS, i was TIRED. physically, emotionally. so i did the very best thing a person can do when they are tired: i rested. i put my to do list on hold, and i just told myself it would all happen someday, maybe even someday soon. but it didn’t have to happen today.

and that revelation? it was so freeing. i am a person who thrives on the ‘go go go’ mentality. i prefer to be busy. i like when things aren’t just done, but done right. i like them to be done fast. sometimes, i can’t sleep until they are done. but that, folks, is a recipe for disaster. especially when you’re working a (somewhat stressful) full time job, juggling a gut renovation, trying to work out 6 days a week, volunteering on the side, and trying to have a social life in between. suffice it to say, i haven’t been on a date in a LONG ASS TIME.

so i gave myself some time to just be. to write if and when i felt like it (it turns out, i didn’t), to do projects when the opportunity arose (guess what? i still haven’t painted my door), and to just live my life, as T.I. says.

that’s where i’ve been. living. but i’m feeling ever so slightly rejuvenated, and inspired by the lovely strangers who have commented and said, “come back, we miss you!” 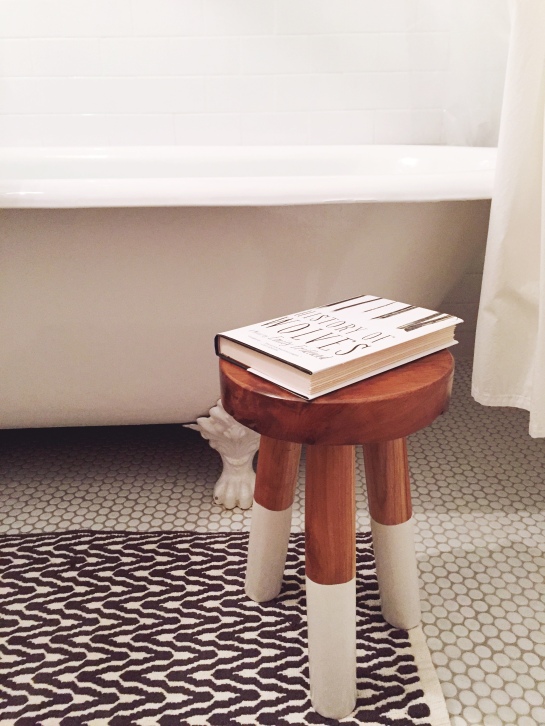 starting is hard, but in the spirit of moving forward, i’m going to do just that: start. below, you’ll find a few snapshots of the grand apartment in its current iteration. it’s not 100% there yet (is it ever?), but it’s close. and it has finally, miraculously, started to feel like home.

if you’re still out there, world, thanks for sticking with me. thanks for reading, and for hearing me out. i love you, for reals, for ever (and ever and ever).