baseball cap on one, yarmulke on the other. welcome to the lower east side.

guys, i know it’s been a wee bit quiet around these parts, but that’s because for a few weeks, i was waiting on things like permits and board approval and i didn’t want to bore you with the basics. but that’s okay, because i’m back, and WITH A VENGEANCE! that’s right folks, i have FINALLY started construction, and the first phase of that is none other than DEMOLITION, which i have literally been waiting for since i put my offer in on the grand apartment back in january (i know, i know. this shit took so freaking long).

see, as i’ve told you before (and as anyone who knows me even a little bit knows), i am an HGTV addict. like, check me into property brothers rehab, i have a problem, i can’t stop watching drew and jonathan tear down walls and build them back up again. if you, like me, watch property brothers (or really, any other show on HGTV), you know that “demo day” is a BFD (for my older readers, BDF = big fucking deal). demo day is where it all begins. it’s also where HGTV likes to insert scary/sad music jonathan knocks down a wall in the kitchen only to discover that it’s load bearing and the homeowners can’t do the open concept he’s promised. essentially, demo day is where stuff starts, and more importantly, where stuff starts to go wrong. why? well, you can’t know what’s behind a wall until you tear it down. and that’s what demo day is all about.

my first reality check came in the form of a sewage pipe, cleverly disguised behind the wall separating the entry to the kitchen and the closet directly to the right of it.

giant sewage pipe that literally runs the length of the entire building. of course i bought the unit where the sewage pipe lives.

last wednesday, i met my contractor, shmulik, at the grand apartment to discuss plans (mostly, to remind him of which walls we were knocking down. thursday morning, he met me outside my current apartment to pick up the keys (which i had stupidly forgotten the morning before). and by thursday afternoon at 3pm, my phone was dinging with the pictures above. demo had officially begun! and with it, bad news had arrived: behind the wall that i intended to (mostly) tear down didn’t just contain the electrical junction box. it was also hiding a gi-NORMOUS sewage pipe that housed ALL THE POO IN THE BUILDING.

if these walls could talk, they’d have some serious potty mouths.

that was the worst joke i’ve ever made. ANYWAY, let’s get into the nitty gritty, shall we? 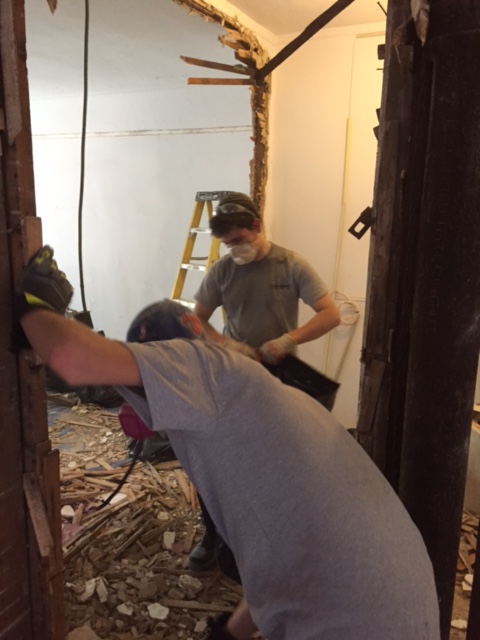 another angle of the pipe. it’s enormous.

that plan was all well and good until they started knocking things down and discovered that the “wall” between the kitchen entry and the closet was there for a reason. a very large, brown metal reason that starts with “sew” and ends with “age pipe.” GROSS. i asked shmulik if it could explode and rain poop all over my pretty new home and to his credit, he didn’t laugh, but instead, assured me that no sewage would be exiting the pipe and entering my new space. HALLELUJAH.

so, what does it mean? thankfully, my breakfast bar can still happen. but the “tiny little pillar” i intended to construct to house the electrical panel (you can’t really see it above, but it’s there) will need to be about a foot wide to house the sewage pipe too. it’s not ideal, but it’s also not the worst thing ever. so my tiny little pillar becomes a rather large column. so long as it hides the poop chamber, i’m satisfied. and if we can make it look cute (maybe some crown molding up top? some art on the wall?), all the better. renovation = compromise, and so long as i still have a place for two people to sit their booties down and swing their legs while they happily sip wine and chow down on pasta, i’m happy.