the bathroom is BAD. but it’s workable. it has space for a toilet, a pedestal sink, and a tub (clawfoot gods, can you hear me?). and there’s a window!

if you’ve been reading along since the beginning, you’ve likely seen the “before pictures” of the grand apartment. none of them are pretty, but the tiny bathroom is among the worst of the bunch (tied with the kitchen; that fridge continues to give me nightmares). see exhibit A, above. SCARY, right? it’s one of those dark, dingy bathrooms that you see on old episodes of SVU and/or in horror movies where the stupid teenage girl is about to be axed to death behind a shitty shower curtain. 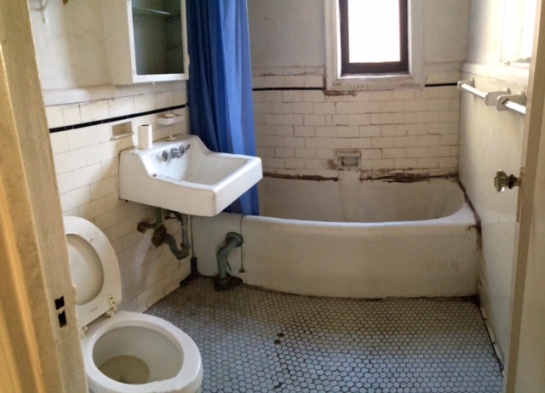 what we’ve got there is a small toilet directly to the left of the door, some verrrry old penny tile with black grout (or is that dirt?) on the floors, a wall-mounted mini sink (that i actually sort of love, may try to save it…), the world’s FUGLIEST medicine cabinet, a mirror that literally looks like it was nailed together by a 5 year old (tiny and not visible in this photo, but trust me) and a tub that is likely crawling with those teeny tiny insects that are so little you can’t see them BUT YOU KNOW THEY ARE THERE.

see that little wooden thing peeking out below? that’s the “mirror” which is legitimately propped up on a nail. it’s maybe 10″ tall. and above the toilet, which is exactly where people like to stand when they get ready in the morning. #hotmess #butactuallysincetheresnoacanditsjune

basically, it’s grimy. it’s gross. it hasn’t been cleaned in lord knows how long, and hasn’t had a proper deep scrub maybe ever. i mean..that paint job. if you could even CALL it that. and that ‘light fixture’? you turn it on by yanking on that string. OLD SCHOOL.

it’s funny. i looked at a few gut reno places before making an offer on the grand apartment, and i’ve looked at many a rental unit over my 8 years in new york. those who live in more civilized parts of the country would be shocked to see the conditions that many of the city’s bathrooms are kept in.

there was this one place i saw on 7th and C that had AMAZING light but was literally maybe 9 feet wide all the way through. the “bathroom” was all the way at the back of the apartment (it was a railroad, aka you walk right through it), and it was, i kid you not, a toilet propped up on a linoleum step, and then the smallest shower stall i’d ever seen directly next to it. not to be gross, but places like that…if you have a bad poo, it’s IN THE SHOWER. WITH YOU. AS YOU ARE TRYING TO GET CLEAN. i can’t. my germaphobe self couldn’t even walk inside that room (and i so badly wanted that apartment to be doable; i LOVE east 7th street). yuck central. POO ALL OVER THE PLACE.

anyway. my point is that as bad as my bathroom looks now, it’s not alone. it’s merely a small fish in a big sea of ugly fishies that are spread all throughout the city. what’s sad is that if you look past the dirt and the grime, you’ll see that once upon a time, this bathroom was beautiful. my complex was built in 1931, and back then, my apartment was beautiful. that penny tile? it’s probably original, as is the subway tile. and while i intend to rip it all out and start fresh, i want to stay as close to the original design as possible.

tomorrow, i’ll show you what that means.